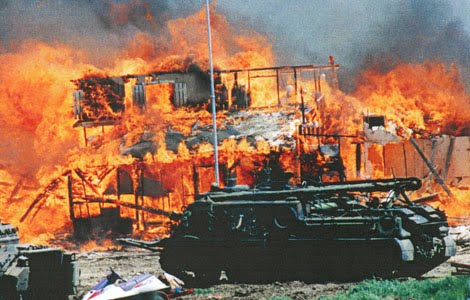 In the U.S. they are pretty much sent to hell, as the above photo attests.  If you don’t remember, you can do an Internet search and read all about it.  This was done by the Clinton administration, Attorney General Janet Reno, not some hot dog Republicans (though they’d probably do the same thing).  76 men, women and children were killed.  Some of them shot, some from smoke inhalation, some crushed by rubble.  Regardless of who is to blame or who did what, this was the outcome.  And everyone knows it would be again.

As a result, there aren’t any radical Christians in the U.S., or so few and they are so inactive we don’t hear of them.  Timothy McVeigh took issue and blew up a federal building in Oklahoma City two years later, to the day.  H was executed by the U.S.  To this day, Timothy McVeigh is the only terrorist executed by the U.S.  I find that fact very odd.

But there have been no follow-up incidents.  And that fact is not odd at all.  It is a logical consequence of, um well, of the consequences themselves.  No one lived to follow-up.

Christianity reduces to two rules.  The first one has to do with an individual’s relation to God and is not relevant to society.  The second gives just one rule for society.  Treat others as you would have them treat you.  It is plain common sense and not difficult.  We may forget, but should we be reminded, it is pretty simple to adjust our behavior.  It is not necessarily a basis for law, like the Islamic Sharia Law.  We have a law against stealing, for example.  But if a thief doesn’t mind being stolen from, he is free under Christianity to be a thief.  Just don’t forget and complain, or the thief will likely get the punishment he meets out.

Well, we already meet out death to our own Christian extremists or terrorists or whatever you want to call them.  It is not too much to ask of Islamists to do the same.  This morning Trump called the attack on a market in Berlin an attack on Christmas.  The news media accused him of escalating the rhetoric, moving the war on terror from a conflict with extremists to a conflict of civilizations.

According to the golden rule of Christianity, the Islamists presumably would like to be treated as they treat others.  That means to let their extremists run amok and cause terror, without appreciably reigning them in.  OK, then.  No complaining if we do just that.  And if the want to be treated as a “civilization,” they can treat their extremists as we do.  Until then, it cannot be a conflict of civilizations, because they aren’t civilized.