As we speak, or browse the web, a district in Seattle has been declared police-free, the CHAZ or Capitol Hill Autonomous Zone.

OK, so they are just protesting, right?

Hmm, depends.  If they start making demands and the government starts granting them without consideration of other voters, or possibly even elections, then it is a Color Revolution like in Ukraine.  There were a bunch of them.  They all failed. 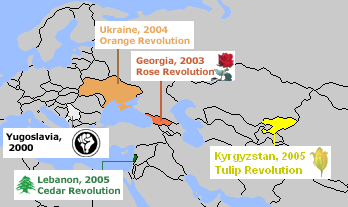 For that matter, the Arab Spring revolutions, very similar, also all failed.

They didn’t fail to make changes or replace governments.  They failed to produce any good result.  They succeeded at producing miserable results and continuing war and poor economies and getting people killed.

The same thing will happen here.  We have no insurance policy against mass hypnotism and craziness.  It will infect us too, just like the virus.

It’s not just the protestors.  Our police behave just like the oppressive police in those failed revolutions.  I’m not saying one side is right and the other wrong.

I’m saying they are both wrong.

Color Revolutions fail because they don’t embrace the rule of law.  See https://foreignpolicy.com/2013/03/18/why-the-color-revolutions-failed/

People resort to revolution not because they are oppressed.  A continuously oppressed people just stay that way.  They happen because people lose what they have, rapidly.

The Seattle section that gave rise to Chaz is described here as “a hub of the city’s trendy arts scene that has been gentrified in recent years as tech workers drive up property prices.”

So the trendy-arts people, out of work because of COVID-19, having their rent driven up astronomically by west coast technology companies (Amazon, Microsoft, Tableau, Cray, Zulily, Redfin), currently financed by unemployment if they are lucky enough, have time on their hands and a lot of legitimate complaints.  But the one that they see as getting the most traction is BLM due to George Floyd.

Color Revolutions don’t “succeed” because they are organized by people who aren’t able to actually seize power in the target countries.  If the US sponsors a color revolution in Ukraine, it isn’t going to actually take power.  No one in Ukraine planned it and is competent to assume power.  If some liberal organization funds BLM in the US, likewise it isn’t going to actually seize power, and the politicians associated with ultra liberal (or ultra conservative) organizations are usually incompetent.

What happens is these color revolutions just make a mess out of society.  Wise up and go home.  Don’t be somebody else’s stool pigeon.  I’m speaking to both police and demonstrators.

About half the US, some argue more, have been trying to remove their President for 4 years.  Many would embrace “any means necessary”.  It looks uncertain whether they will be able to remove him in the next election.  So they protest.

A few years ago the “other side” held protests, the Tea Party.  Since they gained some political power, the country has been gridlocked politically.

I am simply chronicling the demise of our political system.  I’d say “go get a job” but that’s not politically correct while COVID-19 is “in the air.”  Unless you are an essential worker.

Well, that is the rub, isn’t it?  Only the essential workers are actually needed by society.  The rest is just make work, entertainment.  All proposals to solve this (UBI, etc.) amount to the same thing.