If one plots a histogram of country populations, it is NOT a bell curve:

This means it is not random, at least not Gaussian random, and the populations are not independent of one another.  There is some relation.  But if plotting on a log population scale there is more of a traditional shape: 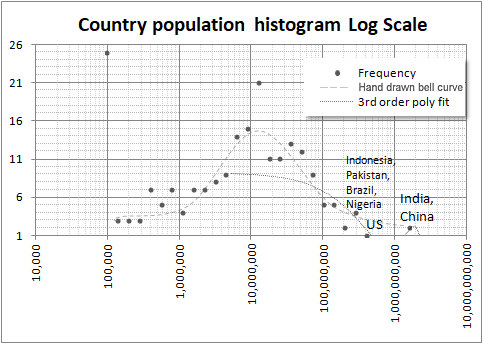 It’s not exactly a bell curve, nor even a Pareto-Levy distribution.  Though it has fat tails they are not just extended but up turned, severely at the low end with countries under 100,000 population (countries are plotted at the top end of the bracket they fall in).

Earlier I wrote: “If you have some idea what’s going on, please leave a comment.”  No one responded.  But eventually I stumbled across what this is.  It is a Log Normal Distribution.

An example of such a mechanism is if the growth of an entire country depends continuously on a certain small factor, an interaction with others, a resource such as a harbor, mine or farm, etc.  If the dependence is on-going, not just a one time consumption of a resource, then a multiplicative product describes the relation.  OK, that makes some sense.  It’s not so strange.

But this is.  Such a distribution is a maximum entropy distribution.  Things will tend toward that distribution over time, inevitably.  Once achieved it is stable.  You won’t permanently change it by having a demonstration and overthrowing the government, no matter how much you want to.

So is our world country distribution going to change to knock off the points that stick out?

It already has.  The above chart doesn’t reckon in the European Union.  The point that sticks up too high is 7 countries that can be distributed back either into the EU or the Russian block.  They aren’t really independent countries.

Adding the EU to the chart would be a dot to the right of the US, filling some of the gap with India and China.

And some day India or China might break up.  Both have no real majority language and are composed of essentially separate regions speaking their own language: