If one plots a histogram of country populations, it is NOT a bell curve: 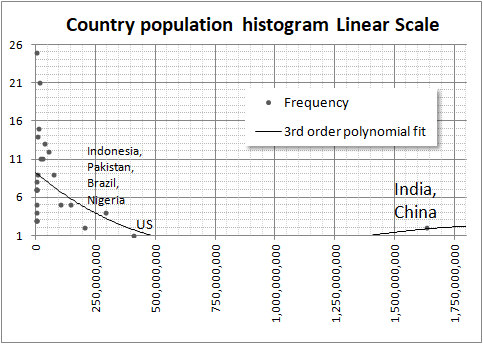 This means it is not random, at least not Gaussian random, and the populations are not independent of one another.  There is some relation.  But if plotting on a log population scale there is more of a traditional shape:

It’s not exactly a bell curve, nor even a Pareto-Levy distribution.  Though it has fat tails they are not just extended but up turned, severely at the low end with countries under 100,000 population (countries are plotted at the top end of the bracket they fall in).

Earlier I wrote: “If you have some idea what’s going on, please leave a comment.”  No one responded.  But eventually I stumbled across what this is.  It is a Log Normal Distribution.

An example of such a mechanism is if the growth of an entire country depends continuously on a certain small factor, an interaction with others, a resource such as a harbor, mine or farm, etc.  If the dependence is on-going, not just a one time consumption of a resource, then a multiplicative product describes the relation.  OK, that makes some sense.  It’s not so strange.

But this is.  Such a distribution is a maximum entropy distribution.  Things will tend toward that distribution over time, inevitably.  Once achieved it is stable.  You won’t permanently change it by having a demonstration and overthrowing the government, no matter how much you want to.

So is our world country distribution going to change to knock off the points that stick out?

It already has.  The above chart doesn’t reckon in the European Union.  The point that sticks up too high is 7 countries that can be distributed back either into the EU or the Russian block.  They aren’t really independent countries.

Adding the EU to the chart would be a dot to the right of the US, filling some of the gap with India and China.

And some day India or China might break up.  Both have no real majority language and are composed of essentially separate regions speaking their own language:

Virgin Galactic says they are unsure how COVID-19 will affect their future operations.  After all, it is largely financed by profits from Virgin Atlantic, an airline.

SpaceX was going to send cargo ships to Mars in 2022 and crew in 2024 to start building not a base, but a city. 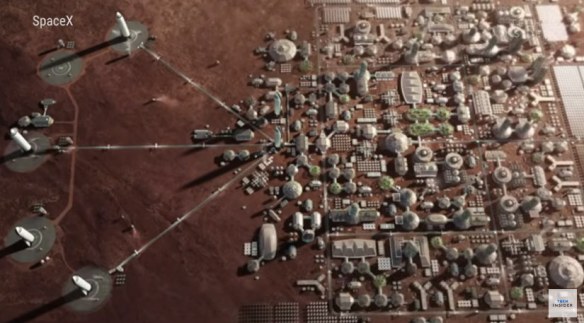 I guarantee you the US Government’s plans are nothing like that.  Boot-prints and gone.  And little chance of ever pulling it off within the political funding cycle.  I should know.  I worked on it for 45 years.  That number should tell you something right there.

Musk was going to finance SpaceX’s Mars plans from selling electric cars (Tesla) and internet service (Starlink).  Well, COVID-19 has nicely shut down his electric car factory and he is suing Alameda County.  Fat lot of good that’ll do by the time it is settled.  He should just go ahead and move it.  But even then, a lot of people are not going to have money to buy the cars.  At least 40% of the world has been shut down.  And there was actually complaint about him launching a Starlink payload during the shut down.

What you are seeing is the first hints of a Fermi Catastrophe.

A Fermi Catastrophe is one kind of solution to the so-called Fermi Paradox.  There are lots of stars older than the sun, and so Earth should have been visited by an extraterrestrial civilization, or at least their probes.  We’ve no evidence for it (despite conspiracy theorists – they call them theorists because there is no physical evidence).  So where are the aliens?

My theory is they were all destroyed by a social catastrophe.

If you thought I was going to say by a virus, sorry to disappoint you.  COVID-19 is not by itself lethal to civilization.  By the wildest estimates it might kill only one in 200 people, raising by half the annual death toll, and then be gone, lost to herd immunity.

COVID-19 is potentially lethal to our civilization because of our reaction to it.  We are killed by our own efforts to avoid getting sick.  Much like most patients who die, do so because of their own immune reactions.  The virus is already declining when they die.

My argument briefly is as follows:

Note, Fermi just asked “Where are they?”  The Fermi Paradox was postulated and described in 1975 by Michael Hart.  It was simply inspired by Fermi’s question.  Lacking any other valid argument with which to dispute Hart’s conclusion (which goes much further than I do), it has become popular of late to criticize him for dragging Fermi’s name into it.  That is really spurious argumentation (the Strawman Fallacy, i.e. attacking something other than Hart’s actual argument, something that can be easily attacked).

The following distinguish Hart’s, Fermi’s and my arguments:

This blog is for people who want notice of the author's releases, appearances and special offers such as signed copies or 99 cent. Blog posts also cover additional notes on the subjects my non-fiction books, and analysis of current events using the principles in the books.