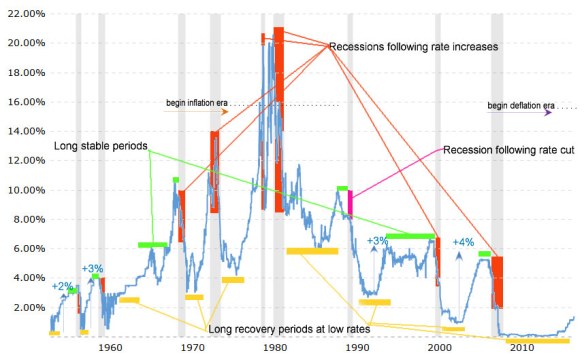 Fed Funds rates last 62 years from macrotrends.net with my annotations

After the longest “recovery” in over half a century (see yellow lines above), and the Fed finally confident to raise interest rates, and yield curves inverting, some people are beginning to ask if that forecasts a recession?  Look at the history above and see for yourself.  In 9 out of 12 cases following interest rate increase campaigns, recession has followed, though in three cases there were periods of level rates of 3 months to 18 months (only one case of the latter, most around 3-6 months) of stability.

It appears a rise of at least 2% is necessary to trigger a recession.  We haven’t got there yet, with rates rising only 1% in the last 7 years.  Most of that is recent, but even so, you can see it is the slowest, most cautious rate increase since the 1950s.  Therefore I do not expect a recession in 2018.  Since it is unlikely rates would rise another full percent in 2018, and even if so it is unlikely their effect would be felt as soon as 2019, I do not expect a recession in 2019 either, and probably not in 2020.  The soonest we might see a recession is 2021, which is also a post-election year in which a new administration might increase taxes or otherwise institute reforms that might pile on top of Fed policy to trigger recession in 2021 or 2022.

The economy will get some boost from the various corporate tax breaks just enacted.  However these might be canceled by aggressive Fed policy.  That, however, would only add up to “neutral” and would not trigger a recession, now or in the future.  In other words, we might be able to absorb an additional 1% Fed increase to around 2.25% without triggering recession.  Only one recession in this chart was triggered by such a mild increase, and that was long ago after a lengthy post-war boom which is before the start time of the chart.

Some new conflict in Korea or Ukraine seems likely.  Unless it is nuclear (not out of the question), it seems unlikely to have a big effect on the world economy.  Those places are insignificant in the world economy, and we already have a sanctions regime on North Korea and Russia.  Military damage to South Korea would trigger a boom from reconstruction aid.  Conflict in Ukraine, if the US continues and extends the new policy of providing offensive armament, might actually result in the lifting of sanctions on Russia, as part of a negotiated settlement to end hostilities.

Most likely the market will be driven by corporate profits, and moves will be less than 20% on the downside.  I won’t make any prediction about upside, but I think the pace of 2018 will be less, with perhaps modest gains in 2019.  The market is still more or less correlated with recovery in the oil industry, and the inability of the US to cooperate in restraining supply to maximize profits continues to threaten the global climate as well as limit market upside.  The US should adopt a temporary cooperative posture with OPEC, not reducing production but limiting upside and apportioning it among suppliers, like the Russians do.  However, this is not politically popular with our naive population and pseudo-populist politicians.