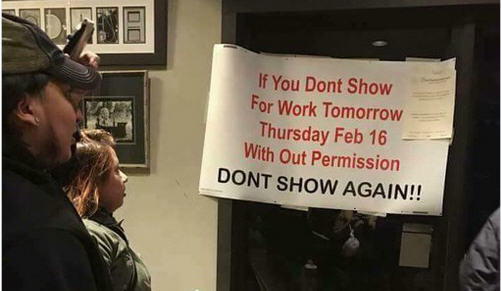 I have long noted an anecdotal correlation between unemployment and countries that have a lot of protests of one kind or another.  Researchers have asked this question, but results are complicated because several factors influence protests (Kerbo & Shaffer, 1986). In 2011 The Economist noted (article) the dramatic increase in protests in developed economies, e.g. Occupy Wall Street in the US, and in Europe anti-austerity protests.

Anti-austerity protests attracted on average 60 times more protestors than anti-war protests, according to The Economist.  The large participation in economic protest movements might, we conjecture, lead to corresponding amplification in any negative effects.  Outright suppression of protests is not considered by this article.  We are looking for natural and indirect effects.

The objective will be to classify, understand, and show examples using existing data, to support our thesis that economic protests have a tendency to either undo themselves without actually accomplishing their stated goals, or generate a backlash that makes the original complaint worse.  For example, protestor sentiment could change, government policy could be aimed at supporting factors rather than the objective per se of the protests, and the government could be changed having an effect that produced consequential changes (which might include outright suppression in the end, but our analysis stops with the unfavorable change of government, not a critique of the policies).

The Economist finds a 1% increase in GDP decreases large protests by 0.4 events, but a 1% decrease in government budgets increases protests by about 1 event, or twice the sensitivity of general economic conditions.  On the face of it, austerity policies seem to be the trigger.  But austerity is a response to a declining economy, and may only be a trigger.

Walker & Mann in 1987 studied two orientations that might lead to protest formation:

Fraternalist relative deprivation was found to be more important.  One may suppose that people resort to collective action (e.g. protest) primarily in response to perceived collective harm.  After all, if only one person is out of a job, who is he going to get to protest with him or her?  But if he is a member of a group who perceives his or her plight as actually or potentially a slight on the group, they may join the cause.  The actual protestors may not even be the ones most grievously harmed.  This is especially evident when protests are on behalf of someone already dead or incarcerated or deported.

But the situation is neither static nor necessarily favorable to the protestors.  Successful movements like women’s suffrage (right to vote) and civil rights may be deceptively inspirational and not reflect the actual potential for success. Economic protests involve negative feedback over the long or short term.

The Euromaidan fits nicely with the theory of Walker and Mann.  Ethnic Russians, who are acutely aware of being hated by Ukrainians (I experienced this personally when speaking Russian in west Ukraine during a 2011 trip, and when I switched to English I was treated much better), felt threatened by laws excluding the use of their language in certain instances, and rhetoric of neo-Nazi factions even if they weren’t a majority.  The fraternally-Russian group was rapidly losing access to political (and one would presume as a consequence economic) power that they once took for granted.  However, their current situation is arguably worse.

It is not so obvious how the Arab Spring is fraternal, but I have several suggestions.  In Tunisia, the previous reference suggests youth vs. others are the two groups.  In Egypt, it was the Muslim Brotherhood vs. secularists.  In Syria it was the Shia Muslims vs. the Alawites and Christians.  Alawites believe in the Trinity, which Mohammad specifically condemned, calling it “a thing most monstrous“.  As the Alawites are (were) in complete control of the government, the majority Shia Muslims felt any economic problems they might have, which were worsening rapidly after the 2008-9 financial crisis (even though there were no bundles of Syrian mortgages, western markets for Middle Eastern goods took a nose dive).  So the fraternal basis was there.

With regard to our conjectured classification of feedback that makes the original complaint worse, it seems the most striking examples are where the protest has escalated to violence provoking a strong reaction from an outgroup (e.g. Syria) or violence directly destroying economic activity (Libya).  In Egypt there were two government changes, the second one “returning” to oppression, and clearly endorsed by a different fraternal class (secular groups, even if they are merely secular Islam).

Both the Euromaidan and Arab Spring are economic protests, even though racial and economic factors underlay them.  Clearly there are fraternal factors, ethnic and religious.

Likewise the labor movement is economic.  The fraternal aspect may be working class vs. capital class, echoing the motivational ideology of many communist revolutions of the early 20th century, all but a couple of which have now been undone.

We tentatively confirm Walker and Mann’s thesis.  However the economic protests particularly, and others in some instances, had a destructive feedback (negative in the sense of the opposite of the protest objective) specifically on the conditions instigating the protest – unemployment in the case of economic protests.

In most of the cases above, with fraternal basis, the protest itself and its immediate consequences diminished the opportunities for a different group, and so the back reaction was swift, taking only three or four years.  In these cases the fortunes of the protesting group may never rise at all, or only very briefly.

In the case of the labor movement, the protest group experienced rising fortunes over many years.  To the extent unions predominated, the “other” significant fraternal groups were management and consumers.  As long as the standard of living was rising and collective bargaining nearly universal, there wasn’t a specific group harmed as a result, and so the motivation for counter-protest was not supported by the stronger fraternal basis, and was largely individual.  At first as trade and outsourcing grew, the number of people impacted was small and did not gain a fraternal basis.  But as the percentage of companies engaging in such practices grew, a fraternal basis grew in several dimensions: those unemployed for related causes, those employed who had repudiated collective bargaining, etc.

The constituency of immigrant groups

In the article associated with the lead photo above, workers at many companies were fired after participating in the “A Day Without Immigrants” protest.  Participation in the protest was not given as a reason for any of them, and likely was not or at least would not have been discovered without absence from work.  If the protestors had been unemployed, they would not have experienced a negative impact so immediately.  But one could say that prior reform such as the Reagan amnesty (widely criticized at the time for this potential) encouraged and enabled both illegal immigration and the employment of immigrants (which was a specific objective of the reform).  The long-term result is now an anti-immigrant political movement with power over both houses of Congress and the Executive Branch, and possibly soon the Supreme Court.

News articles have not reported the legal status of workers participating in “A Day Without Immigrants.”  Based on some protest slogans and interviews, it seems that a group has arisen which does not view legal and illegal immigrants as different groups.  For example the slogan “no human is illegal.”  This is counter-intuitive to political factions that wish to enforce immigration law.  They do not understand why a legal immigrant identifies with illegals, and assume illegals take jobs from legals.  But immigrants who were initially illegal or who have relatives or friends that are illegal have a stronger binding force (self, family) than legal status.  So employed, and in many cases we assume legal, immigrants took part in the protest.  Everyone in America is an immigrant, even the Native Americans who came from Asia.  it is a question of when and under what status.  One could suppose an ethnic bias, but there is no data for it (previous ethnically different groups were at first opposed due to ethnicity and later accepted – so the current situation may be in line with historical norms).  And some of the business owners who have fired workers are members of the same ethnic group (see video in lead photo reference).

The Trump administration has promised to increase jobs and deport illegal immigrants (especially those considered criminal or seditious).  Increasing jobs will increase jobs for immigrants as well, decreasing any threat they may not feel based on rhetoric.  Those who have lost jobs following the current event will, if they find new jobs, likely be deterred from further protest.  This could be a greater deterrence if it does not receive the attention most protests need (so far just the one article, which is fairly low key).

Deporting dangerous illegals, who are more likely to have no job and be available for and motivated for participation in protests, will directly decrease the fraternal constituency of the protesters.  In our estimation, loss of protestor jobs creates a split in the immigrant fraternity between the employed and unemployed, with a negative “personal expectations and attainments” motivation for participation in protests for the employed, likely the larger group.  Diverse small businesses do not make a good target for protests as there are too many of them and not a single point of influence.

Therefore IF Trump is successful, even partly, in either of both of the objectives of deportations and employment, indirect factors will fragment and reduce the size of the fraternal group motivated to protest.  I project that protests will peak in the first year of the Trump administration, and gradually decline in proportion to policies, one of which (employment) is not directly related to the perceived cause.  As the current fraternal group experiences a negative impact from protest participation, the actual impact will weigh against the perceived impact of group identification which includes either illegal immigrants or banned immigrant populations.  The problem of exclusion of legal immigrants who were swept up in the ban will likely be fixed, in order to get the ban reinstated, and as the ban is only for 90 days, that issue will go away on its on.

Side Note: The explicit right to protest?  And limits on freedom of religion.

It is interesting that many protest participants either did not call in to report their absence (which was in some cases grounds for firing), or reported their genuine reason (to participate in a protest).  Traditionally in the U.S., protests are conducted via “sick outs” in which employees call in sick, technically not violating their employment agreements.  It seems this omission was deliberate.  There is an element of suggesting protestors have the right to change government policy and even overturn elections by process of protest.  The U.S. constitution does not contain any such right.  Specifically the first amendment says:

Congress shall make no law respecting an establishment of religion, or prohibiting the free exercise thereof; or abridging the freedom of speech, or of the press; or the right of the people peaceably to assemble, and to petition the government for a redress of grievances.

Thursday’s protest was not a petition to the government, nor was it assembly, nor were any speeches given, so it was not in any way protected.  The first amendment generally constrains only Congress.  It does NOT constrain the President or the executive branch generally.  Thus an order could be given to put a specific religious group in concentration camps, as were the Japanese in the US during WWII.  Nor does it constrain employers or state governments.  It appears from a strict reading state governments and the President could do all sorts of things that were prohibited to Congress.  The Executive Orders might likely be restricted.  But it is hard to see how state governments are restricted by the first amendment.  Islam could be banned state by state, or city by city, etc.